Another pair of socks finished.  These are a Christmas present.  I didn't do a lot of knitting for Christmas this year but these were promised - in a weak moment, LOL! 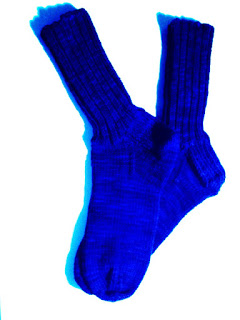 I have no idea why the photo came out  rather blurry and with a blue shadow.  I had to get them wrapped to be delivered though so I didn't have time to take the picture over. 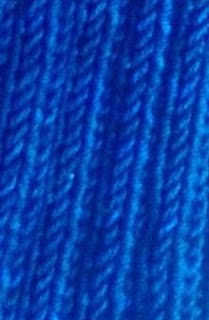 Here's a close up.  There is a little color variation in the yarn making it interesting I think.

I want to knit a pair of boot cuffs next.  I've checked a few patterns on Ravelry.  The cuffs are a surprise for someone else and while I have a general idea of the height of the boots I'm not sure.  Guess I will just wing it.  Boot cuffs look easy enough - except for guessing the length.  Anyone own boot cuffs?  Any knitters out there that have made a pair?

Good Morning.  Are you ready for a cup of coffee this morning or is tea more to your liking?  Bring your drink of choice and join us at Elizabeth's blog.  We party there every Tuesday. 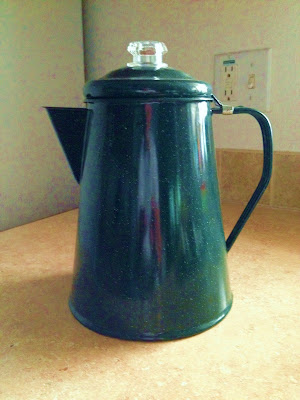 I'm drinking coffee this morning.  I don't use this old percolator type coffee pot for coffee but I like the way it looks.  I like the color and the shape.

Do you remember hearing the noise a percolator makes as it brews coffee?  I do, although I'm pretty sure it was an electric percolator my family used.

Various ways of making coffee have been used over the years. Pour over coffee seems to be the most popular these days.


How to Make Good Coffee.  Mix an egg thoroughly

with two heaping tablespoonfuls of coffee, put into the coffee pot

and pour on it two cups of freshly-boiling water, boil five minutes,

stir well with a fork, set on the back of the stove to keep hot five

minutes, add half a cup of cold water, pour out a little coffee and

pour it back again to clean the grounds from the spout, then let it

stand ten minutes, and be careful not to shake the pot when serving.

There is a decided necessity for protest against the fashion of

grinding coffee that is persisted in by some grocers. They grind it

flavor from it. Housekeepers should understand that it takes much

small particles. It should never be coarser than granulated sugar,

if the best flavor is desired.

I think I'll stick with my Melitta coffee pot.  If you drink coffee,

how do you prepare it?

We had some rain recently but when I went walking yesterday morning the sky was a bright blue.  My eye was also drawn to blue in other places along the way. 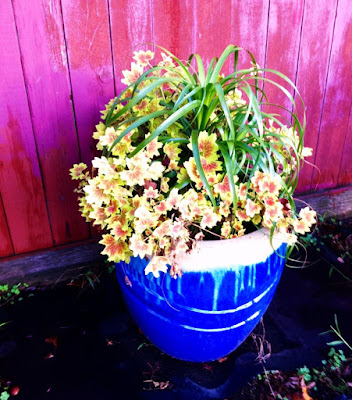 There was a beautiful blue pot outside the gate to one house I passed.  I like the planting as well. 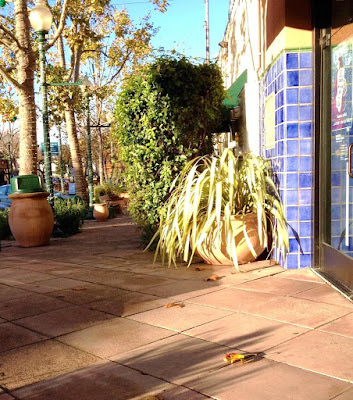 Here you can see a bit of the blue sky and a pretty blue tiled wall.  I often take a break, sit on a bench and look this direction. 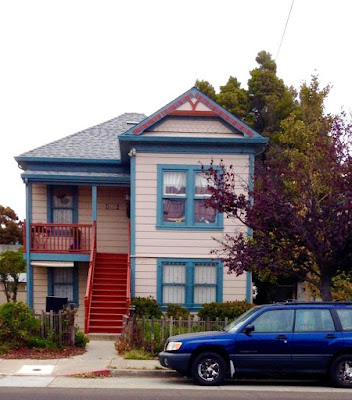 Earlier in the week (note the grey sky) I spotted a house trimmed in blue.  Someone even parked a blue car in front of it.

Hope you are having blue skies today.

It is Thanksgiving Day here in the U.S. and a time to think of what we are thankful for.  One of the things I'm thankful for is all the friends I'm come to know online.  I wish we could gather around the table in person today but just know I'm thinking of you. 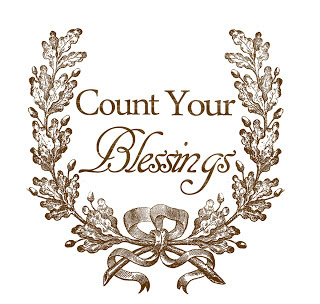 Email ThisBlogThis!Share to TwitterShare to FacebookShare to Pinterest
Labels: around home, holiday, words


This is a book about sewing.  It even has patterns in an envelope inside the back book cover.  If you know me then you know I don't sew.  So what am I doing with this book? 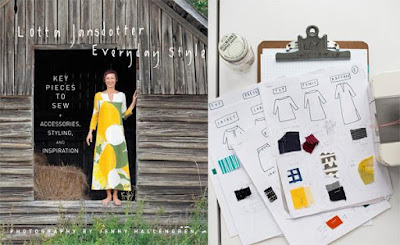 Blame it on the library.  I was looking through the section on knitting and the sewing section was right there next to it.  The book pages were so colorful that I brought it home with me.

It seems Lotta Jansdotter does lots more than create sewing patterns.  In fact, as far as I can tell, her commercial work is in the field of printmaking.  The book includes some simple jewelry making ideas and lots of examples of color/design as well as the sewing portion.

Here is her blog link.

I really enjoyed the book for its pictures and clear explanations.  I think even I could sew something using her very basic patterns.

I give the book a high recommendation even though I won't be using the clothing patterns.  I enjoy reading about creative people and their ideas.  Do you?
Posted by Darla at 5:00 AM 3 comments:

Hello on Tuesday.  I am sorry I missed everyone last week.  We were at the River House and we have yet to get internet there. 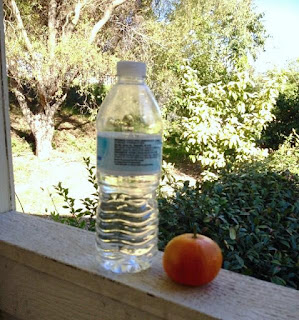 You could find me sitting on the front porch most mornings. Sometimes with my bottle of water.  I picked a tangerine from our tree but it wasn't ripe. 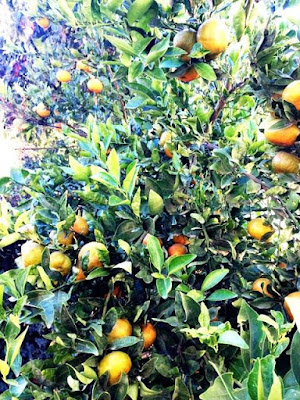 The tree is loaded with fruit.  DH is the official gardener but has never grown any citrus except lemons so this is all new.  We were told that it might be around Christmas before these are ripe. 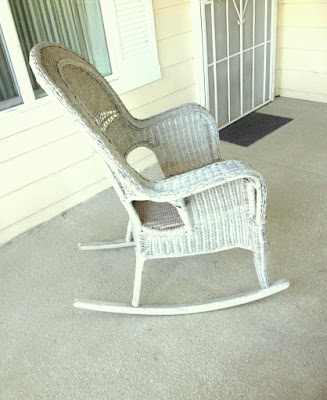 I saved you the best seat on the porch.  You're welcome.  Even though it is getting cooler it is still quite pleasant to sit out there.  I have an old afghan that will go on the rocker if it gets really chilly.

Time to visit Elizabeth and the Tea Gang to see what has been going on this past week.

I finally made some progress on my knitting projects.  This pattern was more lace than I've ever tackled before. 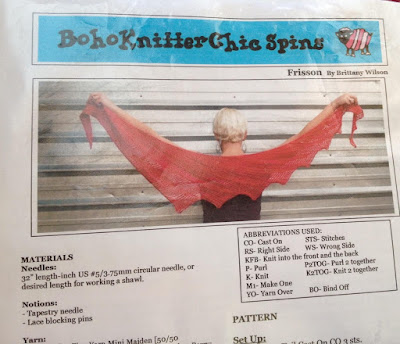 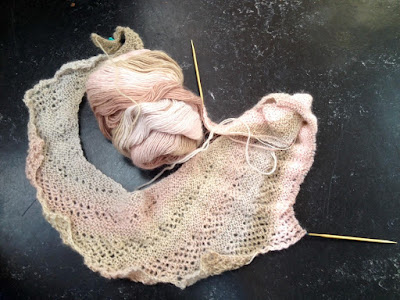 Here is my scarf in progress.  I may have posted this photo before but it shows the true colors of the yarn better than the photo's of the finished project. 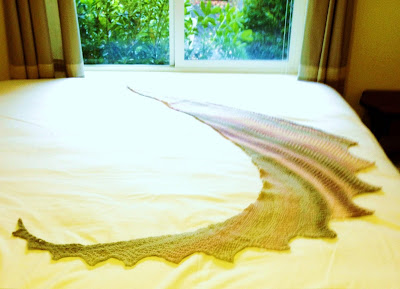 A very long scarf.  Had to lay it on the bed to get a picture. 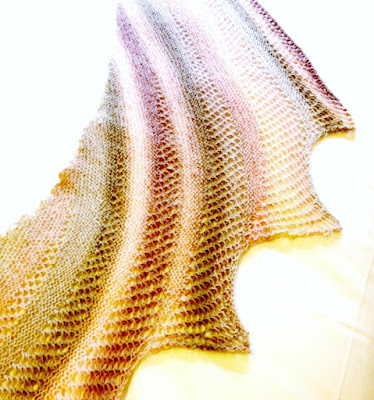 Here is a  closer look at the lace detail.

This one is for me.  I do most of my knitting as gifts for others.  I bought this particular yarn while staying with a friend in Tahoe though and the scarf makes a nice memory.

Anyone else knitting this winter?  Do you knit for yourself or mostly for gift giving?

We haven't been out to eat recently and it seemed like time to do that.  We went to one of our favorite spots for lunch.  It is called The Meal Ticket and it is about 1/2 a mile from home. 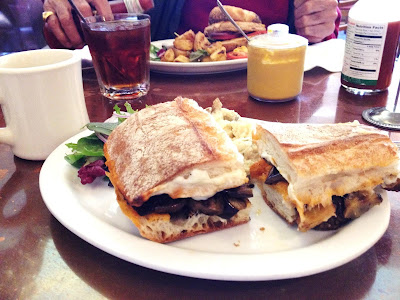 I had the eggplant and mozzarella sandwich and DH had the salmon burger.  I'm a fan of eggplant and they do their sandwich so well. Any other eggplant fans out there?  You can see my drink was coffee and that's his ice tea in the background.  We both enjoyed our meal a lot.   My sandwich is on their standard menu but the salmon burger was on of the choices on their  daily special board. 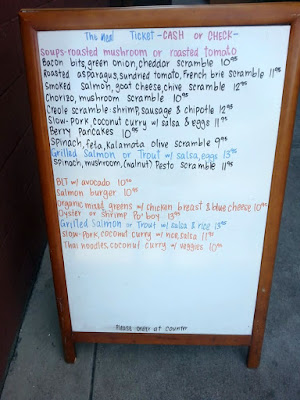 The Meal Ticket is a small place, only open for breakfast and lunch. It is owned by a husband and wife who both work there. The chef owner often brings a meal out himself and always chats with customers.   It has a nice neighborhood feel to it.  It has been featured on the food show "Diners, Drive-ins and Dives".

Time to visit Elizabeth's blog and see what the rest of the group has been up to.  Won't you bring your drink of choice and join us?

Email ThisBlogThis!Share to TwitterShare to FacebookShare to Pinterest
Labels: around home, Tea Stands for Tuesday 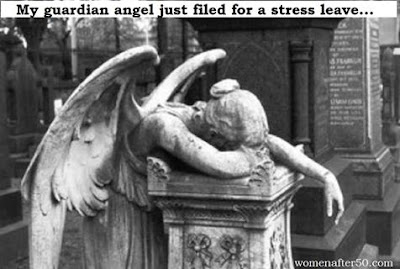 Email ThisBlogThis!Share to TwitterShare to FacebookShare to Pinterest
Labels: words

Today I want to give thanks to all those who have served, and continue to serve, our country. 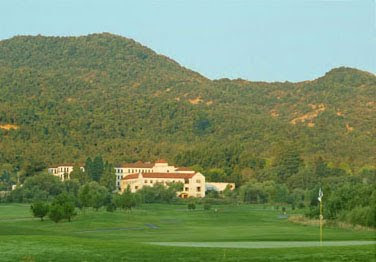 Perhaps you will even have a chance to visit a veteran today and thank them in person.

Email ThisBlogThis!Share to TwitterShare to FacebookShare to Pinterest
Labels: holiday

Every month Elizabeth at Altered Book Lover hosts the Second on the Second.  She invites us to look through older posts and bring back one we would like to share again.  I like old postcards.  I only have a few.  I think I may have brought this post to the top once before, not sure.  I do know it always amuses me though.

A couple of weeks ago I said I would share some old postcards.  This is the second one.
This is perhaps my favorite of the old postcard I have.  Of course when I shuffle through them I find another goody and then that immediately becomes my favorite.  You can see this postcard has suffered some wear and tear. 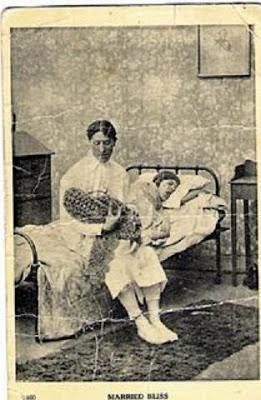 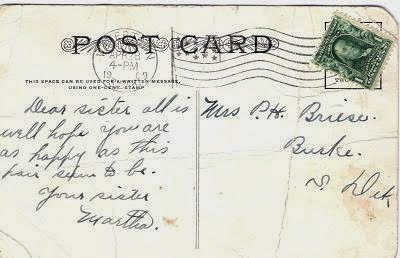 Dear Sister all is well hope you are as happy as this pair seem to be
Your sister
Martha
The postcard is dated 1909.  Sent from sister to sister and once again no street address needed.  I don't know which I enjoy more, the old pictures on the front or the special messages on the backs of the cards.

Send someone a postcard today.  You will probably need their street address and zip code.  Just be careful what you write on the card.  Who knows, maybe someone will be reading it over a hundred years from now.  Reading it and trying to explain to their children that these pieces of paper were sent through a process that ended up with someone walking around and hand delivering the card to the recipient's mailbox.  Then they will have to explain what a mailbox is (or was).

Do you have an old post that deserves a second look?  Join us!

Email ThisBlogThis!Share to TwitterShare to FacebookShare to Pinterest
Labels: Second on the Second, Vintage

Happy Tuesday.  Today I thought I'd give you an update on how furnishing the River House is going.  As some of you know, we are trying to reuse or thrift as much as we can.  A decision based partly on economics but mostly on a love of old things, belief in reusing, and the challenge and the thrill of the hunt. 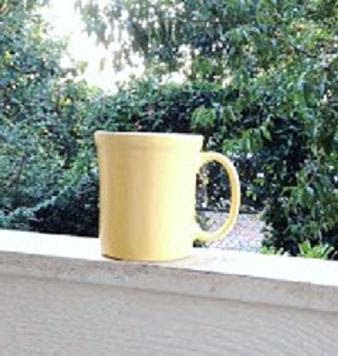 Our set of colorful mismatched china is sufficient.  It would take a special piece to add anything now.  I think you've seen this cup before.  A nice one for my morning coffee. 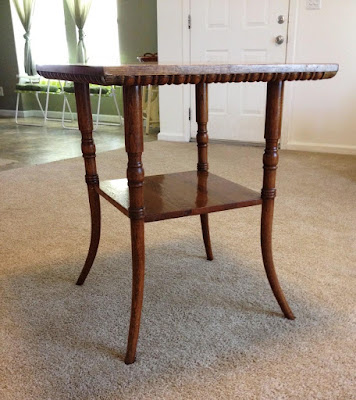 I'm going to show you one "finished" corner section of the living room.  Here's a table I found for $15.  I was going to paint it but decided I like it as is. 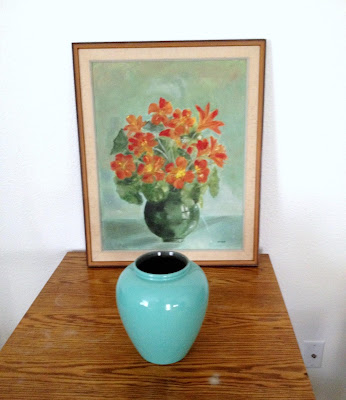 The original oil painting, framed, was $5.  By someone named Wood,   The vase less than $2 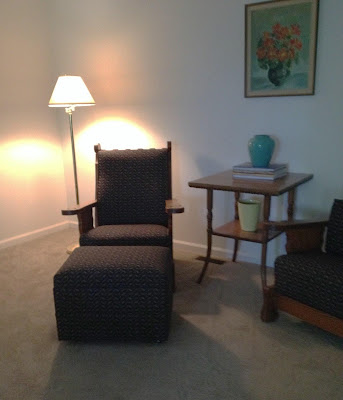 This is the finished area.  Dark photo because I was trying to see how the lamp worked.  It was the latest find for $10.  Look closely, the yellow vase (bottom of table) was $1 and the vase on top is sitting on a stack of knitting books I already had. 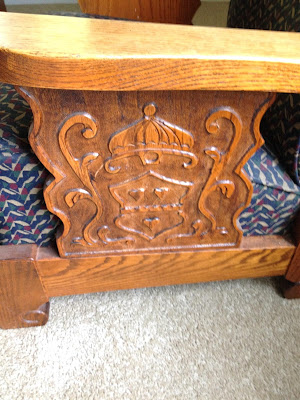 The two chairs and ottoman had been in the house by the Bay for years.  They are very comfortable and were recovered more than once.  I rearranged furniture there and took these to the river.  I've always loved the carving on the sides of the chairs.

I intend to paint that lampshade at some point but otherwise I consider this area done.  Spent about $30 and relocated some furniture. I'm pleased with that.

That's my report.  Now lets hop over to Elizabeth's blog and see what everyone else is talking about on this first Tuesday in November.
Posted by Darla at 4:18 AM 21 comments: